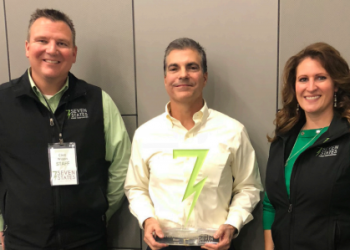 Seven States Power Corp.’s (7SPC) November 30 event in Smyrna, TN, wasn’t its first annual meeting — but it was, to be sure, a first in several regards.

“This was nothing less than a defining moment,” said Seven States Vice President Betsey Kirk McCall. “It truly was historic. It was the first time a Seven States Annual Meeting wasn’t piggy-backed onto a TVPPA event. There was no other reason for members to be in Smyrna on that rainy day, but they turned out.”

“That support and commitment was gratifying,” said McCall. Giving a strong nod to the future was the fact that the meeting was conducted at the Nissan/
Tennessee College of Applied Technology, just yards from the city’s massive Nissan manufacturing plant.

McCall said the selection of the site was intentional, given that Nissan is a leader in the electric vehicle (EV) market and 7SPC’s EV charger installation this summer is the corporation’s first project to reach fruition.

“We wanted to present Nissan’s EV program in an engaging way,” McCall said, “so as to encourage discussion of potential new EV projects and how 7SPC’s team can be of service in supporting our members’ EV and other DER [Distributed Energy Resources] initiatives. “EVs are the future—but the future is here. It’s now. 7SPC has several EV projects in play and we’re ready to launch more,” McCall said.

Annual Meeting attendees were briefed on Nissan’s EV program by company executives Cornelius Willingham and Scott Brierley, while 7SPC’s Brad Rains outlined particulars of the EV charger program. Attendees also toured the Nissan plant and several took advantage of an opportunity to test-drive the all-electric Nissan LEAF. Seven States’ Clint Wilson said both activities were designed to highlight the value of 7SPC’s EV program. “Holding our annual meeting at Nissan highlighted the new marketplace of the utility industry and couldn’t have been a better tie-in with the 7SPC strategic framework,” Wilson said.

Two attendees left the Annual Meeting with more hardware than they’d had when they arrived—Nissan executive Leon Simar, the event’s de facto host, was presented the first 7SPC Innovation Champion award in recognition of not only his efforts attendant to the meeting, but of Nissan’s strides in the EV marketplace.

And 7SPC Director Jeff Dykes of BrightRidge, who’d talked excitedly and at some length about the prospect of purchasing his utility’s first EV charger, wriggled off that particular hook when he won a ClipperCreek charger in a random drawing. “I’ve got a great board, but now my board members are going to argue about whose area it’ll go in,” Dykes said with a broad grin.

Annual Meeting attendees also got updates on 7SPC’s Distributed Energy Resources Management System (DERMS) initiative from Steve Noe and the Meter Data Utilization/Analysis program from Melinda Harris. During the 7SPC business meeting, five incumbents were re-elected to their seats on the Board of Directors:

“Many thanks to the 7SPC staff for organizing a great annual meeting. Well done,” said Watson.