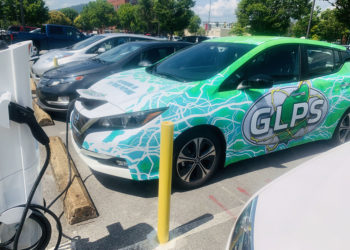 Bill Carroll’s done more than see the future- he’s driving it. The longtime chief executive at Greeneville, Tenn., L&P loves fast, loud cars, but he’s now embraced electric vehicles. The former TVPPA chairman is a true believer, having been won over by a Nissan LEAF. “I didn’t want to like the car,” Carroll said. “I thought (electric vehicles’) were slow, useless and unreliable- but they are none of those.”

Carroll said he decided a year ago that EVs were coming “whether I like it or not,” so he started doing his homework. “If one of our customers wants an HVAC system, they’re going to ask us because we are their trusted energy advisor,” he said. “If I want our customers to come to us in the future with their EV questions, we need to know the answers to those questions.”

So Greeneville L&P took advantage of special terms available to TVPPA and bought a LEAF in March. Carroll said his conversion was nearly immediate. “It has very good acceleration and is fun to drive- and I didn’t expect that,” he said. “When you get it out on the interstate, it’s about 3.8 miles per kilowatt-hour- which is the equivalent of more than 125 miles per gallon.” “So it’s quiet, has no emissions and is cheap to drive,” he said.

“There’s work to be done on infrastructure, but my humble opinion is that when batteries can do 400 miles to 500 miles on a 15-minute fast charge, it’s ‘game over’ for gasoline engines.”

Greeneville L&P has gone all-in with EVs- the utility has a charger at its headquarters and plans to have two more chargers in place in August at the Truck Stops of America/IHOP location at exit 36 off Interstate 81. And Carroll is partnering with California-based Electric Car Guest Drive and Seven States Power Corp. to host a September 25 event at which invited guests can drive a variety of EVs. “We’re excited about it. It’ll be a great show-and-tell,” said Carroll, who also predicted that transportation will eventually account for nearly all of a given utility’s load.

“I see us giving away heating load to gas companies,” he said. “Electric transportation will be a huge load- we’ll have to manage the demand and figure out how it’ll affect our wholesale bills, but I can see a day when it’d be our only load.”