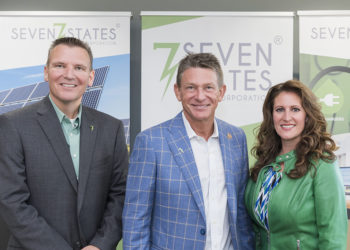 In addressing the 2019 Seven States Power Corp. Annual Meeting, conducted at the Oak Ridge National Laboratory, Randy Boyd laid his cards squarely on the table. “I like to think that ORNL is the best national lab in this country,” said the University of Tennessee’s interim president, who delivered the keynote presentation at the Oct. 3 meeting.

Boyd’s assertion got an enthusiastic second from Seven States Executive Vice President Betsey Kirk McCall. The Annual Meeting, she said, sought to spotlight revenue, research and partnerships – the foundations on which “Seven States is building a business model that will sustain it long into the future.”

“Last year, we talked about electric vehicles and revenue at the Nissan manufacturing plant at Smyrna,” she said. “Having this year’s meeting at ORNL, including tours open to our members, allowed us to showcase the benefits of collaboration and research through partnerships. “Oak Ridge may have started out as a ‘Secret City,’ but ORNL is now truly everyone’s lab – in fact, a few of our members are doing project research [there],” said McCall, who announced that Seven States’ 2020 Annual Meeting will be at the U.S. Space and Rocket Center in Huntsville.

Attendees got a brief overview of ORNL from Tom King, who oversees the sustainable electricity program for the lab and UT-Battelle, the contractor that operates ORNL for the U.S. Department of Energy. The post-meeting tours offered by ORNL were well attended and, according to Guntersville, Ala., EB General Manager Jason Kirkland, more than worth the additional time. “Two words – innovative and unbelievable,” Kirkland said. “The technology they’re using here; it just left me almost speechless.”

In closing the meeting, BrightRidge CEO Jeff Dykes acknowledged that he and his counterparts are serving their constituents in uncertain times, but reminded them that they control their destinies. “It’s exciting, but scary these days,” he said. “We’ve got to change – a lot. But where we go as local power companies is really up to us. You’re doing great things, and we’re going to work closely with Seven States to change the way we do things here in the Valley.”

During the business meeting, Seven States Chairman Rody Blevins of Volunteer EC, Decatur, Tenn., was re-elected to the board. Blevins is scheduled to stand down as chairman in December, but remain on the board.

McCall concluded the meeting by presenting the 2019 Seven States Innovation Champion award to Jeff Cornett, ORNL’s manager of industrial partnerships and economic development. “I’d be remiss if I didn’t say a big ‘thank you’ to Jeff and everyone at ORNL for their amazing hospitality,” she said. “And it goes without saying that none of this could have happened without the attention to detail and time dedicated by the Seven States team.”