Volkswagen to Build EVs in Chattanooga 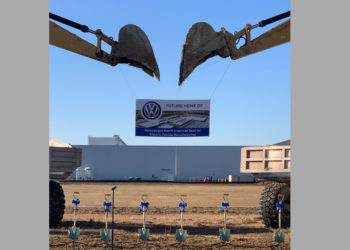 Volkswagen of America began construction Nov. 13 on a Chattanooga, Tenn., plant at which it plans to build electric vehicles (EVs).

The German automaker opened its Chattanooga manufacturing facility in 2011. It plans to spend about $800 million on expanding that site, which would include a nearly 200,000-square-foot battery pack manufacturing plant.

Volkswagen’s aim is to make Chattanooga its North American assembly base for EVs. It plans to start building the I.D. Crozz in Germany and China before launching production in Chattanooga in 2022.

“Electric vehicles are the future of mobility,” said Scott Keogh, president and CEO of Volkswagen Group of America. “Volkswagen will build them for millions, not just for millionaires.

“This is a big, big moment for this company,” Keogh said.

“We’re pleased to see Volkswagen invest in Chattanooga and the utility industry with the production of an EV,” McCall said.