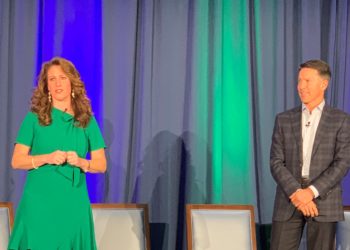 Southwest Airlines clearly believes that, when it comes to hiring and creating a solid workplace culture, one really does get out what one puts in.

“We believe in doing what’s right by our employees, so that they show their best selves at work,” Southwest executive Lacey Jeffrey told her audience at the 2019 Tennessee Valley Marketplace Forum, conducted Nov. 19-21 in Nashville, Tenn.

Jeffrey joined Glenn Allison of Tractor Supply Co. and Bryce Dalley of Facebook in a panel discussion on how to manage disruption and still keep the customer first. Jeffrey said her airline started disrupting its market years ago by relentlessly pursuing customer-first policies, which start with employees.

“It’s about safety, reliability and taking pride in award winning customer service,” she said. “You can hire for skill all day, but when you have 60,000 people representing one brand, you won’t get the service you want if everyone’s not aligned [with those values].”

“Employees and customers are not mutually exclusive groups,” said McCall, who co-emceed the event with TVA’s Dan Pratt. “They’re often one and the same.

“Employees who are also customers have a vested interest in positively reflecting the company brand to the public,” she said. “This has always been the case in the Tennessee Valley, where utility employees also are the customers of [the utility’s] products.”

Brad Rains, who serves as Seven States’ manager of DER deployments and runs point on the corporation’s flourishing EV effort, said the panelists spoke with a single voice on the role electric utilities are likely to play in EV growth.

“Sales are going to grow because of the cars themselves,” he said. “Batteries will get cheaper to make. Range will increase. Cars will get less expensive to build and will have options more attractive to more drivers.

“We fit on the charging side – somebody’s going to have to charge all those EVs and, in our footprint, that’s the local power company selling that power. TDEC is looking to Seven States to be a leader and driving force in building and deploying a charging infrastructure,” Rains said.

Among the Forum’s several other highlights were a presentation from Chick-fil-A executive John Shackelford, who talked about how founder Truett Cathy’s “heart for people” was central to that company’s defining of its purpose and culture. TVA CEO Jeff Lyash closed the Forum with a presentation including the declaration that a “convergence of three things – digitalization, decarbonation and electrification” will be TVA’s primary drivers for the next 10 to 30 years.