Robbins on Dollywood: ‘They call us’ with Energy Questions

Home / Robbins on Dollywood: ‘They call us’ with Energy Questions 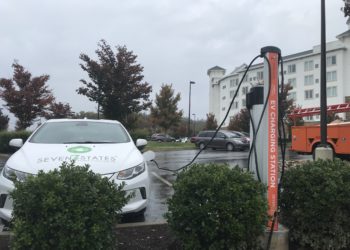 That’s because the utility has already earned that privilege.

“It’s all about relationships,” said Sevier Co. ES Superintendent Allen Robbins, one of the newest members of the Seven States Power Corp. Board of Directors.

“Dollywood used to pay a power bill,” Robbins said. “Now we have a relationship.”

That relationship, Robbins said, is built on a pair of ChargePoint electric vehicle (EV) chargers. The utility leveraged discount pricing available through Seven States to buy the chargers, then installed them at Dollywood’s DreamMore Resort.

“We don’t do a very good job of telling our stories sometimes,” Robbins said. “We went to the [Dollywood] owners looking for a partnership – a way to tell our story to millions of people who visit Dollywood every year.”

Robbins said the chargers were barely plugged in before Dollywood visitors started using them. The partnership has gone so well that Dollywood called on Sevier Co. ES to help with the development of its new Wildwood Grove attraction, which opened this past spring. The utility has four ChargePoint units at Dollywood and plans to install three more elsewhere in its service territory.

“They’re now very excited to help us tell our story,” Robbins said of Dollywood. “Now, when Dollywood has any question about energy, they call us. They’re coming to us every step of the way for input.”

“We’re pleased to offer energy solutions to our members that empower them to meet consumer demand in a changing marketplace,” she said, “and, in so doing, strengthen their relationships with their customers.”