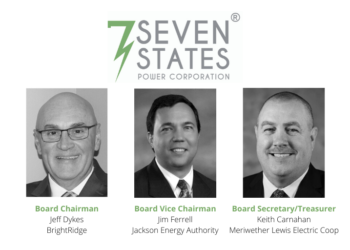 The Seven States Power Corp. Board of Directors will head into 2020 with a new leadership team.

Dykes took the reins at BrightRidge, then Johnson City PB, at the end of 2012. He’s also served as chief executive at Newport, Tenn., UB and Elizabethton, Tenn., ED. He holds an undergraduate degree from Milligan College and succeeds Rody Blevins of Volunteer EC, Decatur, Tenn., as Seven States chairman.

Carnahan is in his fourth year as CEO at Meriwether Lewis EC, having served previously on the cooperative’s board of directors. He earned an undergraduate degree in electrical engineering at Tennessee Tech University and an MBA from Bethel University. Carnahan takes over for Ferrell as the Seven States secretary/treasurer.

Seven States’ directors also elected Phillip Chaney of Scottsboro, Ala., EPB to represent the Alabama District.  Chaney has worked at Scottsboro EPB for 21 years and has been the utility’s manager since mid-2015. He succeeds the retiring Richard Morrissey of Florence, Ala., Utilities on the Seven States board.

“We look forward to an exciting and productive 2020,” McCall said.