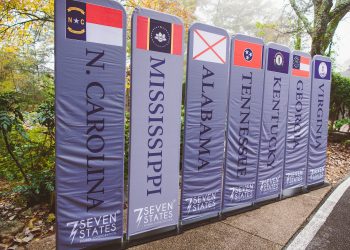 Seven States Power Corporation held its 2021 annual meeting November 4-5 at Rock City in Lookout Mountain, Georgia, just miles from downtown Chattanooga, Tennessee. The two-day event kicked off with a board meeting on the afternoon of Thursday, November 4, with the business meeting following on the morning of Friday, November 5.

“We were thrilled to host our members and special guests at Rock City in the beautiful Scenic City for this year’s annual meeting and solar arbor dedication,” said Betsey Kirk McCall, President and CEO of Seven States Power Corporation. “The turnout was even better than expected and the excitement around the role of Seven States was palpable. We are proud of the work our member-owners are doing and look forward to continuing to partner with them as we move the Tennessee Valley forward together.”

Much of the discussion at the annual meeting centered around the substantial growth Seven States has experienced since it launched as a self-reliant energy solutions company in February 2021, with plans to bring additional staff on board within the next few months.

During the business meeting, Seven States welcomed Jason Griggs, General Manager of Milan Public Utilities, as the newest member of the board of directors from Division 10.

“We are excited about Jason joining the board of directors at this time of growth and look forward to his leadership and service on the board,” said Jeff Dykes, CEO of BrightRidge and Chairman of the Seven States Power Corporation Board of Directors.

Following the conclusion of the business meeting, attendees heard from featured guest speakers, including Wolfgang Maluche, Vice President of Engineering at Volkswagen, and Jeff Lyash, President and CEO of the Tennessee Valley Authority (TVA).

Maluche provided an overview of Volkswagen’s manufacturing operations and research and development activities in the North American region, including in Chattanooga.

“We are really happy and proud that we have the right partners here in the region,” Maluche said.

Click here to view photos from the 2021 annual meeting.