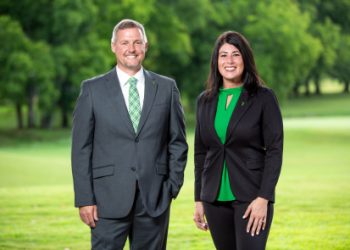 In the last thirty days, Seven States Power Corporation has grown its ability to engage and serve LPCs in the Tennessee Valley by adding two new staff members.

In just over a year, Seven States has doubled in staff size and has become a trusted technology provider and innovation partner for its member-owners: the 153 local power companies in the Tennessee Valley.

“Our growing team is focused on delivering excellence to member-owners as we design, develop, and deploy technology solutions across the Tennessee Valley,” said Betsey Kirk McCall, President and CEO of Seven States Power Corporation. “We are excited to welcome Jessica and BJ to the team.”

Jessica Cleveland joins Seven States from Springfield Electric of Springfield, TN, where she most recently served as an energy services advisor. After nearly a decade as a high school English instructor in White House, TN, Cleveland served as a copy editor for an advertising agency where she acquired valuable skills in executing high-quality ad campaigns for clients. She later joined Springfield Electric to provide support in several key areas, including customer service, external communications, research, and event planning.

“I have respected the talent of the Seven States team from a local power company perspective, so to have the chance to add my voice to the team is very exciting,” said Jessica Cleveland, Director of Business Support. “I am thrilled to be a part of this team as it continues to expand and evolve for the good of the Tennessee Valley.”

Seven States also welcomed BJ Bernard, an information technology specialist with nearly 25 years of industry experience. Bernard will serve as Director of Technology Alignment and provide technical and project management support for the organization’s expanding portfolio of products and services.

Bernard joins Seven States from Duck River Electric Membership Corporation (“DREMC”), an electric cooperative based in Shelbyville, TN, where he most recently served as Director of Broadband Development.

Bernard is a graduate of Nashville State Community College with a professional certification in cybersecurity.

“I am excited to join the professionals at Seven States who serve the Tennessee Valley with an eye toward the future, said BJ Bernard, Director of Technology Alignment. “It’s an honor to be a part of this impactful organization.”