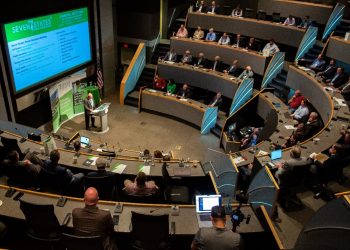 Seven States Power Corporation held its 2022 Annual Meeting November 2-3 at the FedEx Institute of Technology on the University of Memphis campus in Memphis, Tennessee.

The two-day event kicked off with a board meeting on the afternoon of Wednesday, November 2. Leaders of LPCs across the Tennessee Valley participated in a business meeting the following morning, which was followed by guest speakers and an expert panel discussion. A dedication ceremony for two new solar workstations concluded the gathering.

“Our theme for this year’s Annual Meeting, ‘Celebrate Innovation,’ represents the progress our member-owner LPCs and Seven States have made together as we move the Valley forward through technology,” said Betsey Kirk McCall, President and CEO of Seven States Power Corporation. “We appreciate our member-owners joining us for this year’s annual meeting in Memphis – it was exciting to see one another.”

The following members of the Board of Directors were reelected unanimously during the business meeting component of the Annual Meeting:

The Seven States team has doubled in size from four to eight professionals since the previous Annual Meeting at Rock City in Chattanooga, TN. The additional bandwidth and depth of experience have allowed the organization to work on 190 individual projects for 84 different LPCs across the Valley. Seven States has also supported over 60 EV and fiber grant opportunities by applying directly or on behalf of LPCs for funds in excess of $117 million.

“I look forward to the Seven States Annual Meeting each year because it allows member-owners to see how our unique organization is succeeding in areas ranging from EV chargers to cybersecurity and everything in between,” said Jeff Dykes, CEO of BrightRidge and Chairman of the Seven States Power Corporation Board of Directors. “I enjoyed the opportunity to see so many familiar faces and discuss the ways the Board can continue to support the mission of Seven States.”

Following the conclusion of the business meeting, attendees heard from featured guest speakers, including Jeff Lyash, President and CEO of the Tennessee Valley Authority (TVA), and George Andraos, Director of Sustainable Energy and Innovation at Ford Motor Company.

Lyash discussed the important role Seven States plays in the region and answered several questions from the audience on a range of topics such as grid resiliency and decarbonization strategies.

“Seven States has made such huge progress in a short period of time,” said Lyash. “I view Seven States as one of the key innovation players here in the Valley. With the right focus, it could be a key player nationally. It’s a great model.”

Andraos discussed what Ford is doing to bring quality jobs and technological innovation to the Valley through BlueOval City.

“We’re investing $5.6 billion here. BlueOval City isn’t just a project for Ford – it’s the future of Ford,” said Andraos. “I have never seen a site that has come together like the site here in western Tennessee.”

The Innovation Champion Award was presented to Dr. Jasbir Dhaliwal on behalf of the University of Memphis FedEx Institute of Technology. The SPARK Award was awarded to Andrea Harrington on behalf of Weakley County Municipal Electric System. And finally, Philip Lim of Middle TN Electric won a green electric guitar giveaway prize.

The annual meeting concluded with the announcement that drew great fanfare from the attendees: the 2023 Seven States Annual Meeting will be held Nov. 1-2 at the Corvette Museum in Bowling Green, KY!

After lunch, leaders from MLGW, the FedEx Institute, TVA, and Seven States dedicated two new solar workstations on the University of Memphis campus. These innovative additions will give students, faculty, staff, and visitors a place to sit and charge electronic devices for years to come using the power of the sun.