Board Meeting and CHP Tour

Home / Board Meeting and CHP Tour 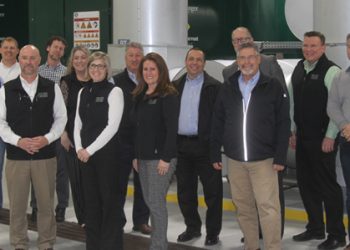 “As more members explore CHP technology, Seven States staff is sharing opportunities for members and the board to not only see distributed-energy technologies up close, but to get so close they can literally touch them,” said 7SPC Vice President Betsey Kirk McCall.

After the meeting at 7SPC’s offices, several board members repaired to Erlanger Hospital, which spends nearly $6 million annually on electricity and natural gas to heat and cool its downtown facilities and provide power for everything from hot water to air filtration and a host of medical services. 7SPC Director Mike Bolin of Knoxville, Tennessee UB pronounced the plant, “very impressive.”

The Erlanger project was an eye-opener for Monte Cooper of Jackson, Tennessee EA, which is eyeing CHP for its wastewater treatment plant.

“This project is quite a bit bigger than what we’re looking at, but the concepts are the same,” said Cooper, who accompanied JEA CEO and 7SPC Director Jim Ferrell. “Seeing this gives me a good idea of how things piece together.”

The 7SPC board announced a five-year partnership through Stowers Machinery Corp. that enables members to purchase backup generation at preferred pricing. The natural gas-powered generators are available for all members who order through 7SPC. Prices are based on the year of delivery, so Stowers recommends ordering by August of each year to take advantage of that year’s pricing.

The 7SPC Board was updated on the Distributed Energy Resources Management System (DERMS); four 7SPC board members signed letters of intent demonstrating their commitment to participating in DERMS this year. Signees will receive special pricing offered by OATI in partnership with Seven States. The incentive pricing is set to expire in July.

For more information about letters of intent, contact Steve Noe, TVPPA director of strategic energy solutions, at snoe@tvppa.com or 423-490-7929.

The 7SPC Board Heard from Brad Rains, TVPPA’s manager of DER Deployments, who reported that 7SPC has 10 electric-vehicle (EV) projects in the pipeline, each of which is expected to reach completion in the next three to six months. Three of 7SPC’s four EV parking spaces in Chattanooga are under lease. 7SPC is also participating in the Drive Electric Tennessee program.

During the meeting, the board eviewed the company’s strategy and its success in meeting its goals over the last year. The board reaffirmed 7SPC’s strategy, which includes the company’s prioritization of DERMS, battery storage, backup generation, CHP, electric vehicles, and equity ownership in TVA assets. Seven States is currently facilitating backup generation projects for three member LPCs, is exploring water heater projects with five members, is working with Jackson, Tennessee EA on a potential CHP project for the wastewater treatment plant there, and is working on special pricing programs with DER manufacturers.