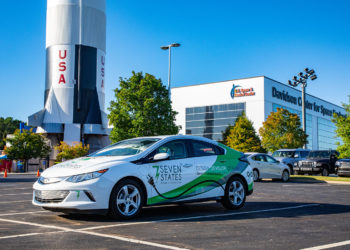 Our members celebrated the Seven States Power’s achievements over the past year during the annual meeting at the U.S. Space & Rocket Center in Huntsville, Ala., on Thursday, October 1. The annual meeting offered both in-person and virtual attendance, with more than 100 members and their families and guests coming together in person in Huntsville. Seven States Power President & CEO, Doug Peters opened the meeting which was then led by Seven States’ vice chair, Jim Farrell of Jackson, Tenn., Energy Authority.

Astronaut Dr. Don Thomas, who served on four shuttle missions, was the keynote speaker. He spoke about the perseverance required to accomplish goals and also shared the important role energy, in particular solar energy, has played in space flight and exploration.

Following Thomas’s inspiring speech, members voted on business items including approval of a bylaw change that clarifies a quorum of the membership as a whole shall be present for all Director elections. The change also streamlines and consolidates the provisions relating to the Board election process. The members elected two new board members and re-elected six. Erik Brinke was selected to replace Jeremy Nelms in the Southeastern District and Terry Wimberley will replace Jim Ferrell as the Western District representative. Ferrell served six years on the board (two full terms) and served in various leadership positions through the transition and growth of Seven States.

The real highlights of the meeting came when Seven States team members Betsey Kirk McCall, Clint Wilson, Steve Noe, and Brad Rains discussed how the team has carried out the Seven States Power mission to deliver innovative technology solutions and establish sustainable resources that aid in the economic viability of member-owned – and Seven States Power enabled – distributed generation and renewable energy projects across the Tennessee Valley.

The Seven States Power team has doubled the number of projects completed each year since 2018. In the past year, they logged more than 31,000 miles on the company’s hybrid Chevy Bolt travelling throughout the Valley to work on projects for 26 different local power companies. A total of 72 projects were completed with an additional 31 under contract and 48 more in the evaluation phase. Six local power companies have begun implementing solar generation projects with Seven States Power under TVA’s flexibility option. One of those projects is a unique shared solar array being brought online in a partnership between Appalachian EC, New Market, Tenn., and Morristown, Tenn., Utilities. Two additional LPCs are evaluating potential projects with Seven States. Project Liftoff, which was dedicated at the end of the meeting represents Seven States’ first completed solar installation.

Other successes include 64 completed EV charger installations including two DC-Fast Chargers with another 69 either under contract or in negotiation; two DER management systems being installed; and, three backup generator systems purchased for Volunteer Energy Cooperative, Decatur, Tenn.

The Seven States Power team also shared news about emerging products in their portfolio like battery storage, a middle-mile fiber network, cybersecurity and Electric Ride-Thru technology. The team discussed their role in a number of unique research projects with Tennessee Tech, the University of Tennessee and ORNL, and highlighted partnerships with the Tennessee Valley Corridor, Tennessee Advanced Energy Business Council, TenneSEIA and TVA.

The day closed out with the dedication and ribbon-cutting ceremony for the successful launch of Project Liftoff.