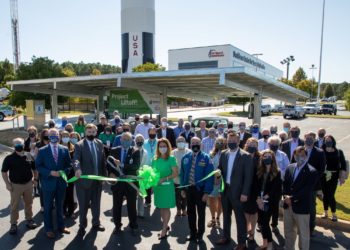 “Project Liftoff reflects both the ingenuity and the collaborative effort that it took to break away from gravity and send rockets soaring toward the stars. Seven States set out to imagine the possibilities of bringing together three technologies solar energy, battery storage, and EV chargers – that would connect power generation to space exploration in a way that visitors could interact with the technology. Achieving this vision required the partnership and creativity of our partners, the U.S. Space & Rocket Center, and Huntsville Utilities,” said McCall.

The combination of solar power and battery storage will offer an economic assist to the USSRC by allowing them to offset energy usage by using the 30kW of electricity generated by solar power right in their parking lot. The USSRC, like so many businesses that depend on tourism, has been especially affected by the economic ravages of the COVID-19 pandemic. “We’ll also gain the benefit of having excess energy that it produces off its solar power which will help us reduce our cost of our electricity which is a very valuable thing for us as we’re working through all of our challenges as we go forward,” said the USSRC’s Ramirez.

In addition to helping the not-for-profit USSRC offset their energy costs, the Project Liftoff installation promises to help educate the thousands of visitors who pass through the center during a typical year about how solar power has enabled solar exploration, from the early solar panels that powered the Vanguard 1 satellite launched in 1958 to NASA’s current use of solar arrays to power everything from the Mars Rover to the International Space Station.

The outstanding results of the collaboration involved in bringing Project Liftoff to fruition also illustrates the power of partnership among the Tennessee Valley’s 153 local power companies. “It’s time we start integrating these technologies into our distribution systems and energy portfolios, and leverage them for the benefit of our customers,” said Kelley.

“As we enter into a new era with rapid developments in the distributed energy resources space, and the flexibility options afforded by TVA, knowledge-sharing and partnerships among local power companies can drive the kind of innovation that resulted in this first-in-the-Valley combined solar, battery and EV charger installation,” said McCall.